A new data system measures how many Maine postsecondary grads have found jobs in the state—and what they are being paid.

The Maine Department of Labor (MDOL) Center for Workforce Research and Information recently unveiled a data system that measures college graduates' wage and employment outcomes. The system links the records of students in the University of Maine System (UMS) and Maine community colleges with their corresponding unemployment insurance wage records, available at MDOL. Bringing these sets of data together improves our ability to answer important questions regarding the extent to which new graduates find jobs in Maine and what they are paid. We're learning, for example, that a majority of the graduates stayed in Maine and found employment, those with two-year degrees earned competitive wages, and nursing graduates remained in high demand.

The information can inform career decisions, program review, and policy making. Prospective students can do better at evaluating different paths of education, and guidance counselors and parents can access reliable data to help students navigate career choices. College administrators and educators can tap comprehensive data for program evaluation and resource allocation. Economic developers, employers, and policymakers can be more informed about the supply of newly trained graduates in strategic sectors and occupations.

How Does It Work?

Records of graduates from UMS and Maine's community colleges, classes of 2009 to 2011, are linked to quarterly wage data available at MDOL. Wage data are available for jobs in Maine that provide unemployment insurance (UI) benefits or UI-covered employment. Combining three academic years enables greater reporting at the level of area of study while at the same time maintaining confidentiality. 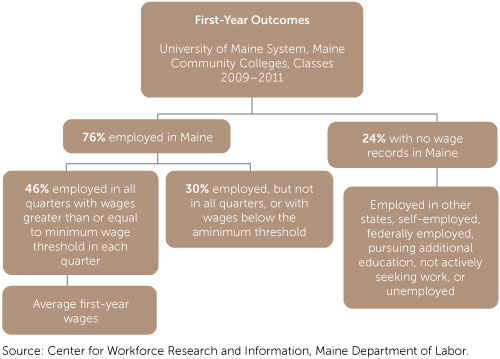 The data system produces employment and wage outcomes for the first year after graduation, defined as quarters three through six postgraduation. This gives individuals two quarters after completing school to find employment. Longer-term outcomes will be added as more data become available. Results are aggregated and reported by credential, area of study, and school.

Data sharing among partners is governed in accordance with the Family Education Rights and Privacy Act and other federal and state confidentiality and privacy laws and provisions.

Linking education and wage data has numerous benefits, but there are also limitations in how the results should be interpreted:[1]

What Have We Learned?

Matching student data with wage records helps address heretofore difficult-to-answer questions regarding the employment outcomes of those in postsecondary-education programs. Answers to the questions shed light on the Maine economy, education programs, career options, and more. Consider these preliminary observations of first-year outcomes for the classes of 2009 to 2011.

Most Who Stay in Maine Find Work

Overall, 76 percent of the graduates were identified as having been employed in Maine during the first year after completing their degree. This broad measure captures individuals who had a wage record at any point during quarters three through six postgraduation. Although it does not tell us how long a particular individual was employed or her earnings, it does indicate that a relatively high proportion of graduates remained in-state and garnered some type of work after graduation.

Community college graduates were more likely to have been employed in Maine than university counterparts. Eighty-four percent of those with a community college award worked in-state the first year after graduation, compared with 73 percent of university graduates. Considering that 16 percent of the University of Maine's students originate from outside the state or country, those figures are not surprising.

Many Are Not Working Full-Time

Although three-fourths of the graduates found employment in Maine, less than half had wage records consistent with being fully employed. Specifically, 46 percent had earnings above a minimum wage threshold in each quarter of the measurement period.[2] The remaining 30 percent of working graduates were either not employed in all quarters or had wages below the minimum threshold.

The ability of 2009-2011 graduates to find employment was likely hampered by the Great Recession.[3] As more data are collected and longer-term outcomes processed, we expect to gain a better understanding of the economy's impact on hiring demand and job retention. Thus far, we can summarize the employment outcomes for all completers as follows: 46 percent had wage data indicative of being employed full time in Maine, 30 percent had some employment, and 24 percent were either not employed, working in another state, self-employed, or employed by the federal government. (See "First-Year Outcomes.")

To understand what graduates earned, we evaluated the group of completers that had wages above the minimum threshold in every quarter throughout the measurement period. By focusing on the 46 percent that met these criteria-and excluding the 30 percent that did not-we are able to better understand what those who were more fully and continuously employed earned during the first year after completing their award.

Average first-year wages support the widely held notion that higher levels of education tend to be accompanied by higher remuneration. (See "Average First-Year Wages.") On one side of the spectrum, those who completed certificates had wages in the low $30,000 range, whereas those with a doctorate earned approximately twice that amount. In general, graduates with higher levels of education had higher first-year wages.

Some programs stand out as exceptional, with wages above that of the next-highest credential. Those programs (diplomas, post-associate certificates, and post-baccalaureate and post-master's certificates) were relatively small and had high percentages of graduates in well-paid areas. Analyzing future cohorts will help determine if these results are anomalies or normative.
First-year wages for associate's and bachelor's degrees were also similar. Although that could reflect something about the mix of jobs available in Maine, longer-term study is necessary to fully understand the differences between these credentials. Two- and four-year programs have different emphases, with the former tending to be more vocationally focused and the latter typically including more general-education credits and affording a wider array of career options.

MDOL's employment-outcomes dashboard makes the types of data presented here available for hundreds of credentials and areas of study. For example, more than 740 students across six campuses graduated with an associate's degree in nursing. These students were highly employable-91 percent found jobs during the first year, and 78 percent had wage data consistent with full-time employment. With first-year wages of approximately $46,000, these graduates were among the highest paid for those with a two-year credential. Employment outcomes were comparable across campuses. (See "Wage , Employment Outcomes.")

The dashboard can be used to understand the progression in outcomes associated with higher levels of educational attainment within a field of study. To extend the previous example, those graduating with a bachelor's in nursing had, on average, 10 percent higher wages than those with the associate's degree but lower employment ratios. Those graduating with a master's in nursing had first-year wages 30 percent to 45 percent higher than those with bachelor's degrees.[4]

MDOL's new data system represents an important step in understanding the relationship between specific credentials and employment outcomes. With further development, additional sources of data and longer-term outcomes can be added, which will enhance our understanding of these complex relationships. In an environment of scarce resources and limited funds, such information is likely to play a prominent role in career and resource planning.

Paul Leparulo is the deputy director of workforce development in the Maine Department of Labor. Contact him at a.paul.leparulo@maine.gov.

Articles may be reprinted if Communities & Banking and the author are credited and the following disclaimer is used: "The views expressed are not necessarily those of the Federal Reserve Bank of Boston or the Federal Reserve System. Information about organizations and upcoming events is strictly informational and not an endorsement."