The term “gig economy” refers to many forms of nonstandard work arrangements—typically nonpayroll-based and of short duration—including driving for Uber or Lyft as well as babysitting or house sitting and numerous other jobs. While work in the gig economy offers flexible hours and independence, such employment typically lacks the benefits that accompany payroll-based work such as subsidized health insurance, paid vacation, and employer-matched contributions to a 401(k) retirement account. Several economic studies using survey and/or administrative data have found that alternative work arrangements have increased in prevalence in recent decades or at least since the onset of the Great Recession. In contrast, a recent Bureau of Labor Statistics (BLS 2018) report finds no significant increase in the prevalence of alternative work arrangements between 2005 and 2017. In addition to the debate over long-term trends in alternative work arrangements, it is not yet clear how recent improvements in the formal labor market affected participation in the gig economy. Using the Survey of Informal Work Participation that is conducted each December as part of the Survey of Consumer Expectations, this paper assesses changes in informal work activity across 2015, 2016, and 2017 to investigate whether participation in the gig economy increased or decreased as the unemployment rate fell and other labor market indicators also improved. Fluctuations in the prevalence of informal “gig” work may hold implications for worker well-being, for the conduct of monetary policy, and for the measurement of employment. 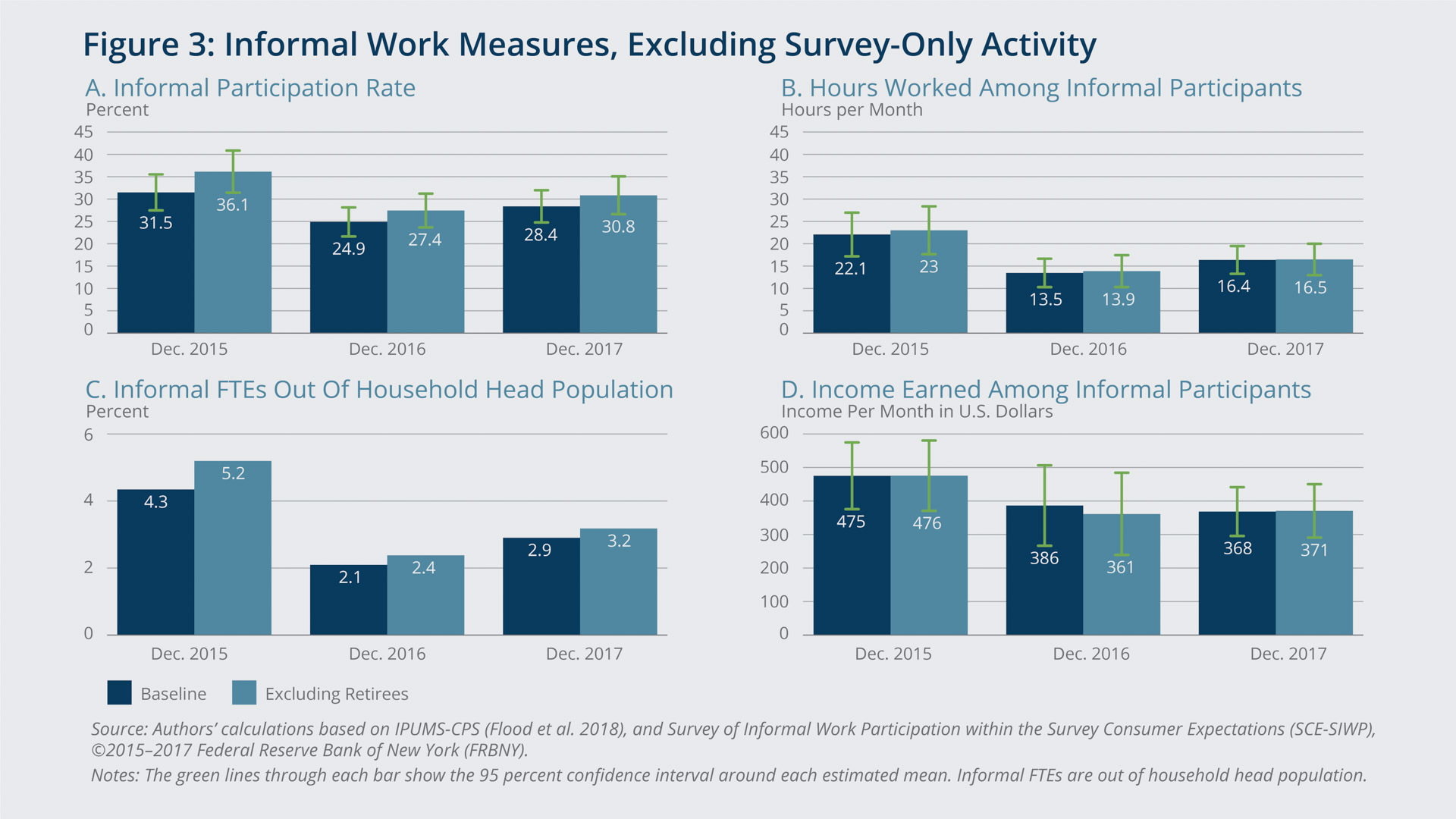 The analysis suggests that informal work activity—particularly in terms of hours per month—behaves countercyclically in the sense that such activity declines as labor market indicators (such as the unemployment rate) improve. While additional survey responses suggest that this relationship may be causal—for example people may reduce their informal hours because they gain preferred employment opportunities in the formal sector—we cannot definitively prove such a causal link. Fluctuations in the prevalence of informal work have potential implications for the measurement of employment, a consideration that informs US monetary policy. Gaining a better understanding of how the gig economy functions in the United States has potentially important welfare implications for individuals, as workers in such arrangements may be more vulnerable when economic conditions deteriorate.

A variety of researchers and public entities have estimated the prevalence of nontraditional work arrangements—using diverse definitions—in recent decades, and the topic has received increasing attention in the past five years. Despite numerous media reports that the prevalence of nonstandard work has increased since the Great Recession, not all sources agree on this point, and very little evidence exists relating to hours or earnings from such arrangements and their changes over time. Using unique data from the Survey of Informal Work Participation (SIWP), we describe changes in informal work activity across 2015, 2016, and 2017 along multiple dimensions and for a variety of specific jobs. Considering the net changes observed between 2015 and 2017, we find that participation rates and earnings were mostly flat across the period, while average hours for gig workers declined by economically and statistically significant margins. The aggregate number of full-time equivalent jobs embodied in informal work—a measure combining participation rates and hours—also declined by an economically significant margin between 2015 and 2017. A major exception to these trends is that average ridesharing hours more than quadrupled between 2015 and 2017. We find some evidence that the recent declines in informal work hours represented a response to declining unemployment rates, but during this time period there also appears to have been upward structural pressure on gig work that provided a particular boost to platform-based work.