Orleans County lies in the most remote, rural area of Vermont, one of the three counties that make up what is often referred to as Vermont's "Northeast Kingdom." In Orleans County, you will find rugged terrain, beautiful blue lakes, green mountains and fields, and clear skies with crisp, clean air.

You'll also find signs that Orleans is a poor county, however, the second poorest county in Vermont. About 15 percent of the population live below the poverty line, on par with the national average but greater than for New England as a whole. (See "Percent of Population Living Below the Poverty Level.") Jobs are scattered, and many workers spend a large percentage of their income just getting to work. Moreover, according to Hunger Free Vermont, more than 23 percent of Orleans County inhabitants in 2013 needed to use 3 Squares Vermont (the federal Supplemental Nutrition Assistance Program, or SNAP) to supplement their food budget.[1]

Farmers do not have a future supported through a retirement plan set up by an employer.

The Orleans County population is relatively old, and as in the rest of the state, older people have higher unemployment. (See "Unemployment Rate by Age Group.") That is why the local AARP, in the process of building an "Age-Friendly Action Plan," decided to collect data on the employment picture for older Orleans workers. The result was the 2014 Community Assessment of Orleans County. (See "Age Distribution of Population 16 years and Older.")

The three gaps are tied to ongoing changes in the local economy. In this rural area, a growing number of small family farms are ending production and selling their land. In Lowell, Vermont, just a couple of decades ago, there were dozens of dairy farms supporting resident families. Now, there are three. Sometimes farmers continue working by adding part-time jobs-for example, selling hay from their fields, driving delivery trucks, fixing small machines, or working in the wood industry or at the nearby ski resort. Farmers do not have a future supported through a retirement plan set up by an employer.

Although the Vermont Association of Business, Industry, and Rehabilitation (VABIR) in Newport disseminates information to residents with disabilities, including the elderly, many members of the general public do not seem to be finding out about local work or training opportunities. That was reflected in the AARP survey, which highlighted an information gap in seven key areas: job opportunities, town functions, transportation, volunteering , outdoor spaces and buildings, health and wellness, and housing.

The Role of Development

In the Northeast Kingdom, many hopes rest on Jay Peak Resort and CEO Bill Stenger's use of the federal EB-5 visa program to bring in investment dollars. EB-5 has already helped to expand the ski resort-in terms of more land development, new buildings, attractions like a year-round water park, revenue, and employment-and is expected to spark a strong biotech industry in nearby Newport.

EB-5 allows foreign investors access to green cards for their family if they invest $500,000 in an approved project in an underserved community. For every approved investment, the project must add 10 jobs to the local economy for a period of time.[2] Without this type of help, economic development would come more slowly in the Northeast Kingdom.

The dramatic growth in jobs at Jay Peak has provided flexible part-time and service employment as well as some well-paying managerial and executive positions. Overall, about 75 percent of the new jobs have gone to local residents, according to the CEO Stenger. In an area of sparse population, that has meant opportunities for older workers.[3]

Additionally, many residents are hoping to find jobs at the planned biotech firm. When AnC Bio VT had its groundbreaking on May 12, 2015, the Burlington Free Press reported that "the roughly 80,000-square AnC Bio Vermont facility will do research, manufacture heart-lung machines and portable dialysis machines, and perform cell-culturing for heart therapy."

The 400 to 450 jobs will be one-third researchers and executives, one-third managers, and one-third plant operations, according to Stenger, who also is an AnC Bio VT executive.[4] The company expects to open in 2017.

Transportation development will also be important for improved employment numbers, and not just for older workers. In rural areas, there is always a high demand for reliable transportation. Recent ly, a partnership encouraged by VABIR between Jay Peak Resort and the Vermont Transportation Agency has added shuttles for workers in communities up to a 90-minute drive from the resort.[5] The idea is to save expense for workers and provi de a reliable workforce for the resort even on the snowiest days.

In December 2013, the Newport City Council and Mayor Paul Monette put the Orleans County municipality forward as the first in Vermont to join AARP's nationwide Network of Age-Friendly Communities-approving a resolution to establish and participate in a citizen advisory council that involves the active engagement of older adults.[6]

In another positive development, one that could ultimately provide employment opportunities for workers who need flexibility, so-called maker spaces are popping up around the state. These are places where intergenerational partnerships create new products and help to launch entrepreneurs, many of whom ar e developing solutions for improved caregiving and mobility.[7]

But challenges remain. A frequently mentioned barrier to livability and economic growth in the Northeast Kingdom is telecommunications. Access to reliable, affordable, high-speed broadband Internet service and cellular service is spotty at best, a situation that affects not only the mundane functions of municipal government but robust information sharing, telemedicine, and plans to expand businesses.

And of course there is the challenge of long-term unemployment, which can affect older workers disproportionately. Fortunately, according to the AARP Public Policy Institute, the federal Workforce Innovation and Opportunities Act (WIOA), which took effect on July 1, 2015, has five provisions that could help alleviate that challenge.

First, the WIOA singles out for assistance individuals with barriers to employment, such as those aged 55 and older, "along with several groups in which older workers are disproportionate ly represented: the long-term unemployed, displaced homemakers, and persons with disabilities. States must develop plans on how they will serve these groups and report how they have been served. Reporting data must be disaggregated by age," the AARP Public P olicy Institute notes. 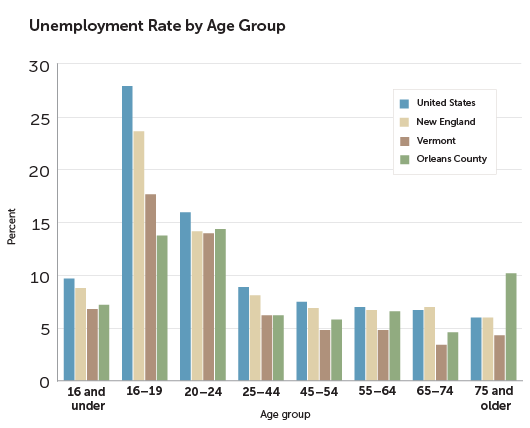 "Work is good, and many Americans like it. Anyone who loves to work should be able to."

Second, the WIOA eliminates the sequencing of services, which should enable job seekers to access training and supports immediately rather than going through a time-consuming protocol.[8] Third, the WIOA improves services to people with disabilities, many of whom are older. (See "Percent of Population with Some Disability.") Fourth, it broadens state flexibility on supportive services that many older people need if they are to work. And finally, it "enhances reporting requirements. Core programs will be required to report on performance indicators such the number of participants who entered and retained employment, median wages, and credential acquisition. Administrative reports on individuals with barriers to employment must be made public."

The AARP Public Policy Institute continues, "If effectively implemented, WIOA will result in a streamlined workforce development system that promotes job training and encourages greater collaboration between employers and training providers, such as community colleges."

As promising as such changes are, however, the effects of the law will not be felt immediately. Says New School for Social Research professor Teresa Ghilarducci, "The disturbing new work reality is that nonexistent and too-small 401(k) account balances give less bargaining power to older workers to quit a job or find a job they love. The [national] ave rage Social Security benefit is about $15,000 per year; the median income from IRAs, and 401(k) plans will yield $2,400 per year, which barely meets the federal poverty standard for living in a chronic state of want and deprivation."[9] 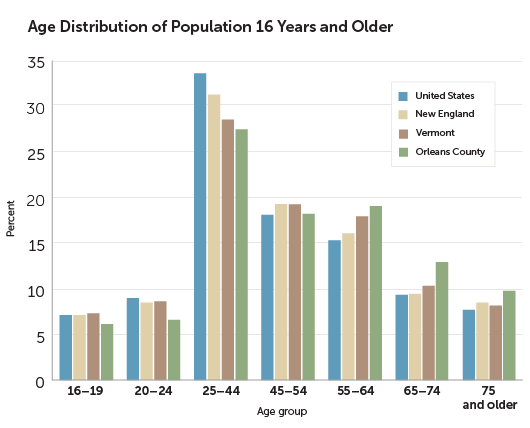 Ghilarducci adds that "having a secure pension, an adequate nest-egg, a small or zero mortgage, and a strong Social Security and Medicare system are some of the best ways to ensure the jobs older people get are the ones they love." Even so, she says, "Work is good, and many Americans like it. Anyone who loves to work should be able to."

Patricia M. Sears is the CEO of NEKTI Consulting. She is based in Lowell, Vermont. Contact her at <a href="mailto:trish@kin gdomcommons.com">trish@kingdomcommons.com.

Article s may be reprinted if Communities & Banking and the author are credited and the following disclaimer is used: "The views expressed are not necessarily those of the Federal Reserve Bank of Boston or the Federal Reserve System. Information about organizations and upcoming events is strictly informational and not an endorsement."

The Implications of High Leverage for Financial Instability Risk, Real Economic Activity, and Appropriate Policy Responses Aging and Declining Populations in Northern New England: Is There a Role for Immigration? Unemployment insurance claims in New England across the COVID-19 pandemic: Updates through June 2021 Who Counts as Employed? Informal Work, Employment Status, and Labor Market Slack Why Have Revenue-Strapped New England School Districts Been Slow to Turn to Alternative Funding Sources?